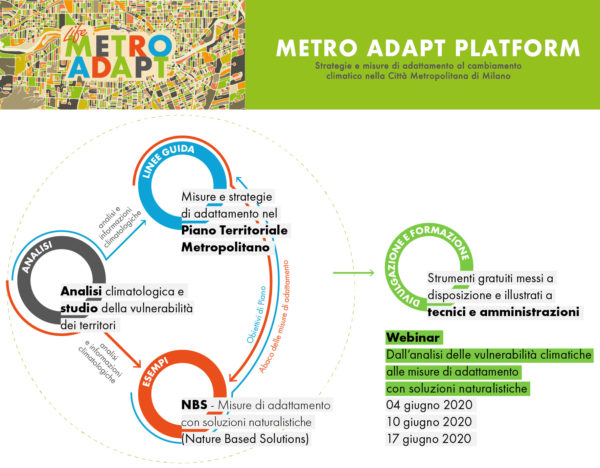 In June, the LIFE Metro Adapt project organized three virtual events during which the Environment and Landscape Protection Department of the Metropolitan City of Milan (project leader) explained the project, the actions and the achieved results as well as the future aims and the next steps.

The three webinars pursued both informative and educational purposes and they involved technicians of the Metropolitan City of Milan and those experts who have been involved in the project so far.

Over the first two years of the project, the greatest commitment has consisted in creating tools that enable a constantly updated and realistic overview of the climate change vulnerabilities affecting Milan metropolitan area. The process resulted in an open and interactive platform: the Metro Adapt Platform. During the meetings, the speakers explained its functioning, how the analysis of the territory was carried out and they illustrated the available data.

The aim is to develop a common strategy to generate an effective response to climate change and to enable municipalities to implement a series of concrete actions that will be effective only if shared throughout all the territory.  With this purpose, the Metro Adapt project offers its analysis tools for free, which could also be useful as a support to the analysis of the Sustainable Energy and Climate Action Plan (SECAP), of all the Municipalities of the Metropolitan City of Milan.

Nevertheless, the aim is not just to acquire knowledge about the current situation, but also to identify and propose, through the Metropolitan Territorial Plan (MTP), viable solutions that can be implemented by the Municipalities of the Metropolitan City.

Thanks to the close collaboration among the project partners, it has been possible to identify some of the most effective climate change adaptation strategies, especially the Nature-Based Solutions (NBS). Municipalities can now implement solutions in response to situations that are increasingly affecting the metropolitan territory, particularly those involving localized floods and heat islands.