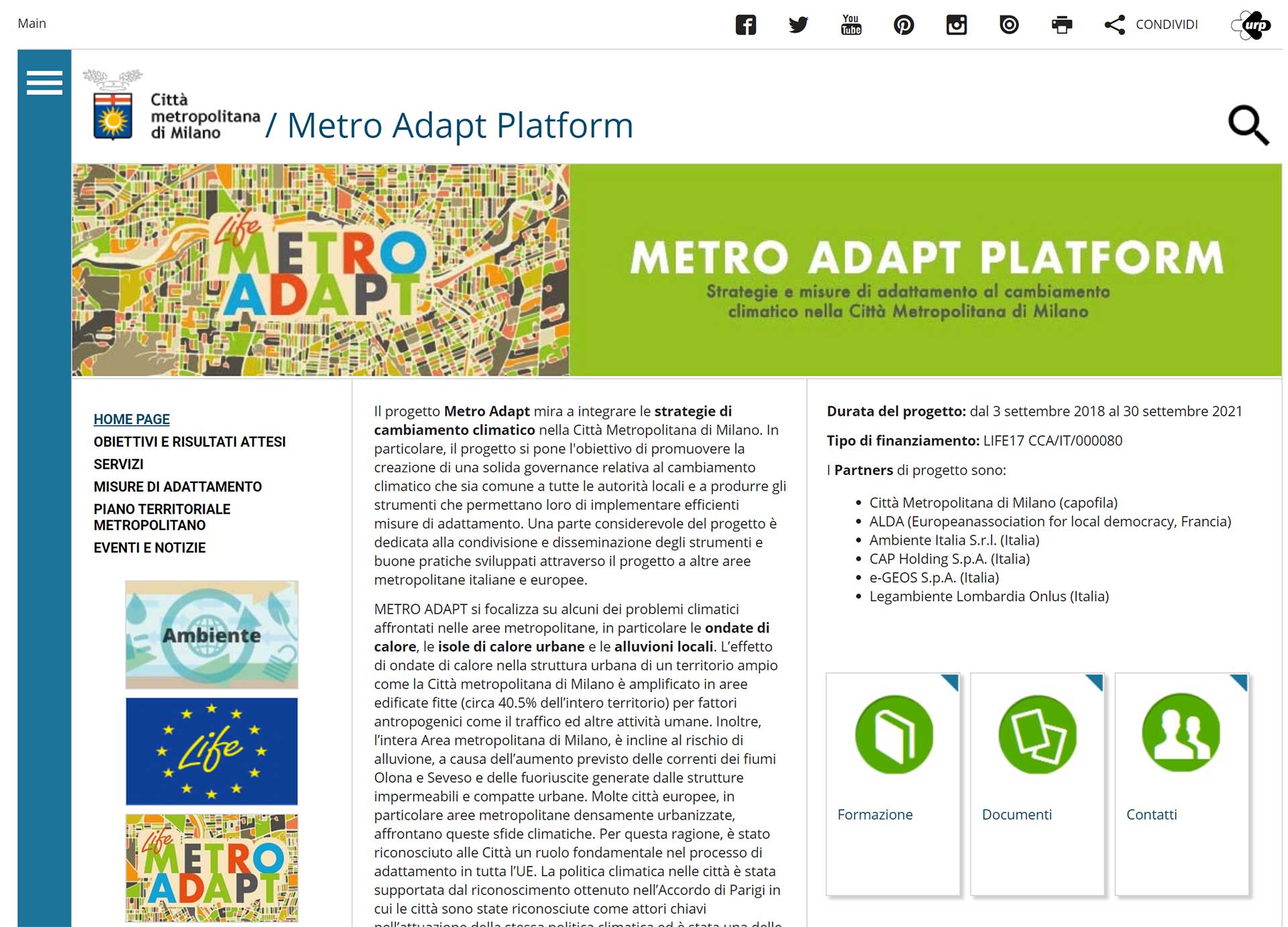 WHAT IS THE METRO ADAPT PLATFORM?

The LIFE Metro Adapt project aims to integrate climate change adaptation measures and strategies into the territorial policies of the Metropolitan City of Milan. The project seeks to promote the creation of a climate change governance that is common to all local authorities and to produce the tools that allow the implementation of effective and efficient adaptation measures.

Hence, access to up-to-date data on climate vulnerabilities of the metropolitan territory by local authorities is crucial to ensure the implementation of climate change adaptation policies and strategies suited to the needs and characteristics of the territory.

The Metro Adapt Platform is designed as a dissemination tool, with the aim of providing a comprehensive overview of the main issues addressed by the project. In addition to the general information on the objectives and the achieved results, the Platform offers the possibility to have access to all the tools, analyses and collected data. In this way, information on climate vulnerabilities affecting the territory can be shared with local administrations and authorities within the Metropolitan Area of Milan.

SERVICES AND INFORMATION PROVIDED BY THE PLATFORM

Through the use of the DeCiMetro system of the Metropolitan City of Milan, it is possible to have access to updated data on thermal anomalies and hydraulic risks concerning the metropolitan area of Milan and to consult the informative documents produced by the members of the project related to climate change adaptation strategies the different Nature-Based Solutions that can be adopted in urban areas.

The Metro Adapt project is focused on the climate problems faced by urban areas, proposing tools to support mitigation and adaptation strategies. In particular, the increase in temperatures, the lower frequency of precipitation concentrated in increasingly shorter periods, and the simultaneous increase of the intensity of these phenomena, are among the main outcomes of climate change.

One of the thermal anomalies which affect Milan Metropolitan Area the most is the Urban Heat Island (UHI) phenomenon. Climate change projections for the European continent, including the Po basin, agree that during this century heat waves will become more and more frequent, intense and they will last longer, especially during the summer season.

The impact of heatwaves in the city is not homogeneous. It is amplified by elements such as the level of urbanization, the size of the roads, the traffic level and soil impermeabilization. As an example, tall buildings trap heat and reduce the cooling effect of winds and vegetation, especially at night. As a result, in some densely built urban areas, night-time temperatures can reach peaks of up to 10°C above the temperatures measured in nearby rural areas.

The territory of the metropolitan city of Milan, which covers an area of about 1600 km2 spread over 133 municipalities, is a highly urbanized territory. About 41% of the territory is covered by built-up areas and infrastructure, 50% by agricultural areas and only 8% by forests (Corine Land Cover 2015). Furthermore, it’s a highly populated territory, with a density of about 2,038 inhabitants/km2, for a total of 3.2 million inhabitants (in 2016), with a demographic structure made up of 22% of the population over 64 years old (in 2016), and climatic conditions that provide high temperatures and high humidity during the summer period. Due to such a situation, it is expected that several municipalities, mainly in the northern area, will face an increase in heatwaves.

Several studies have determined that, during heat waves, mortality in urban areas increases significantly. For public administrations and the bodies responsible for prevention and rescue (Civil Protection), it is therefore of great importance to have a precise knowledge of the areas of the city where the heat wave phenomenon occurs, in order to provide for urgent interventions (e.g. water distribution or relocation of vulnerable people to cooler areas) and urban planning measures aimed at adopting climate adaptation instruments, such as the installation of green and blue infrastructures.

As part of the Metro Adapt project, in the last 4 years data from NASA’s Landsat 8 and Modis Aqua and Terra satellites were collected for the hottest nights, setting a minimum average night temperature. The positive variations compared to this reference temperature are considered thermal anomalies. In order to determine the risk levels to which the population (with particular attention to the most sensitive groups, i.e. children under 10 and adults over 70) is exposed, it is necessary to analyze the intensity of the thermal anomalies, identifying the most exposed areas. 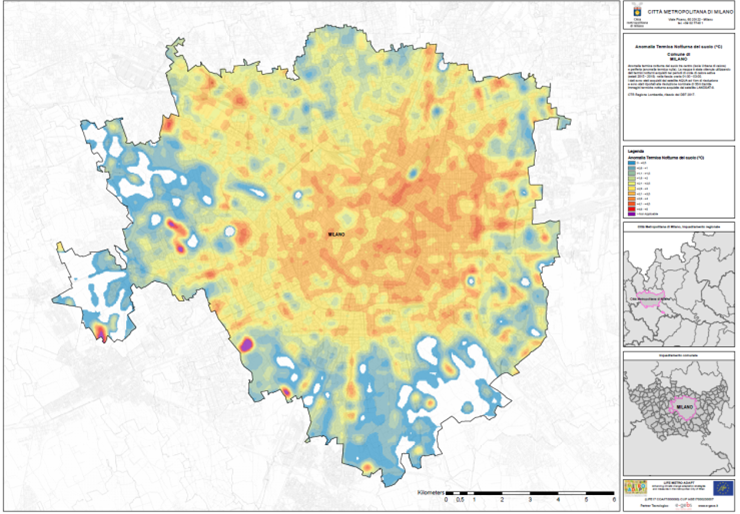 The entire Metropolitan Area of Milan is prone to flood risk, due to the expected increase in the the Olona and Seveso rivers currents and the spills generated by the impermeable and compact urban structures. In an attempt to gain an in-depth knowledge of the phenomenon and to reduce its impact, the Metro Adapt project analyzed the hydraulic risk of the area taking into account the rainwater retention capacity of the soil, based on the soil use/cover and pedological soil characteristics. The available tools are the following:

Enter our platform to consult the maps and updated data about urban heat islands and flood risk in Milan Metropolitan Areas. Thanks to the innovative and dynamic system, you can interact with the data provided through guided queries. Data can be filtered by municipality, risk class and population group, and can also be saved and downloaded using mobile devices.

One of the main strategies that a metropolitan area can implement to improve the effectiveness of climate change adaptation measures is the design and development of the so-called Nature-Based Solutions.

Nature-Based Solutions (NBS) are interventions inspired and supported by Nature that guarantee environmental, social, and economic benefits, contributing to improving climate change adaptation in urban areas and increasing territorial resilience. Green roofs, green walls, urban forests, alternative rainwater management systems and urban agriculture are just some of the solutions that can be implemented in urban and peri-urban areas.

Within the Metro Adapt project, co-funded by the LIFE Programme of the European Union, a catalogue of 20 NBS has been produced to illustrate the solutions that can be implemented in urban and peri-urban areas, specifying their scale of application, describing their environmental and socio-economic benefits, the advantages and disadvantages and providing examples of good practices.

The metropolitan city of Milan is one of the most densely populated urban areas both on a national and European level. As regards climate change, it undoubtedly represents an area subject to the critical issues, typical of many metropolitan areas, in particular the Mediterranean ones.

Some of the most important issues affecting Milan Metropolitan area: i) hydrogeological risks related to the disposal of rainwater linked to the intensification of stormwater phenomena; ii) excessive soil consumption; iii) pollution and scarcity of water resource; iv) heat waves; v) non-renewable energy over consumption.

These are real environmental emergencies for the metropolitan area that require specific and innovative planning approaches. The Metropolitan City of Milan has therefore defined within its general planning tool, the Metropolitan Territorial Plan, an action strategy for its entire territory, improving the integration of adaptation policies within territorial planning and creating the necessary framework for the concrete implementation of initiatives that contribute to increasing the resilience and adaptabilily of the territory to the most appropriate scale.