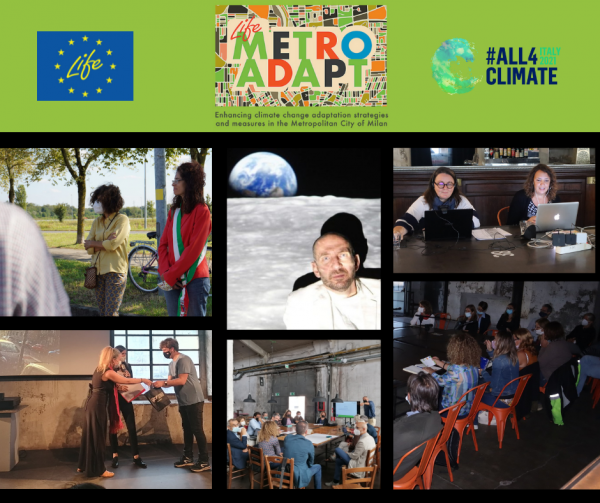 We have reached the end of two intense weeks that were filled with events organized by the LIFE Metro Adapt project – funded by the LIFE program of the European Union. Metro Adapt was part of the initiatives related to Pre-Cop26 in Milan, the preparatory event for the 26th UN Climate Summit in Glasgow and All4 Climate, which brings together all the events dedicated to the fight against climate change.

The week of events organized by Life Metro Adapt started on September 21st, in the morning, with the International Workshop “Climate Change Adaptation Strategies in European Metropolises”, which took place online and in English. The workshop was addressed to both national and international, local and regional authorities and, specifically, to European metropolitan areas, with the aim of creating a space for dialogue and exchange of good practices of adaptation to climate change in urban areas. The workshop, included as a satellite event of the Covenant of Mayors 2021 Ceremony, was an opportunity to bring attention to various experiences in different territories, united in the challenge of climate change adaptation.

The day continued in the late morning with the exchange meeting with the Climate Knowledge Network at the Spirit de Milan (MI). The aim of this interesting meeting was to share the Nature-Based Solutions (NBS) monitoring tool created by the Metro Adapt LIFE Project and to encourage the creation of synergies among participants. The meeting was very fruitful and saw professionals and technical experts in climate sharing their ideas and experiences related to the Metro Adapt Project in the metropolitan area.

In addition to the project partners, the table was attended by local authorities – City of Milan, Meteorological Observatory Milan Cathedral, Lombardy Foundation for the Environment, Italian Society of Landscape Ecology (SIEP-IALE) – ERSAF (Regional Agency for Services to Agriculture and Forestry), the Polytechnic of Milan and the IUAV University of Venice.

“We are very proud indeed of the fact that the Life Metro Adapt project has always worked hand in hand with the Climate Knowledge Network, confirming how much Milan’s territorial system is able to identify climatological problems and implement multi-objective adaptation measures,” explains Cinzia Davoli, Project Manager of LIFE Metro Adapt for the Metropolitan City of Milan. “We all worked together to identify the next steps to take concretely to support and speed up the ecological and climatological transition our territory needs. We will also include the results of this work in a proposal that we will make to the European Union in the stages of dialogue that will open in the coming months.”

The day continued with a tour to discover nature-based adaptation solutions (NBS) implemented and operating within the metropolitan territory.

The first week ended on Friday, September 24th, with the play PALE BLUE DOT – PALLIDO PALLINO BLU at the Piccolo Teatro Grassi (MI). A Jet Propulsion Theatre show of the theater company Arditodesio. An incredible story of hope, wonder, beauty and despair, by and with Andrea Brunello, directed by Christian Di Domenico, music by Enrico Merlin. The evening was introduced by the Metropolitan City of Milan and Legambiente Lombardia, and then, after the show, the participants had the opportunity to talk with Andrea Brunello and the project team.

The second week saw, on September 28th, 2021, the successful conclusion of the Life Metro Adapt project. During the morning and early afternoon at Lo Spirit de Milan (MI), the final conference “Strategies and measures for adaptation to climate change in the Metropolitan City of Milan” was held, which was followed both in presence and in online mode by more than 100 people.

The partners of the project consist of the Metropolitan City of Milan, which is the lead partner, the European Association for Local Democracy (ALDA), Ambiente Italia Srl, the CAP Group, e-Geos S.p.A. and Legambiente Lombardia. They presented to the media, EU delegates and numerous stakeholders, the results achieved during three years of work, in particular through the implementation of pilot interventions aimed at combating the high hydraulic risk to which the metropolitan area of Milan is exposed. These results were obtained thanks to Nature-Based Solutions, which are engineering works that are inspired by nature in order to study and reproduce its elements in urban areas to improve their resilience.

Afterwards, participants were invited to share their knowledge and experience in three focus groups that addressed three issues related to the project:

After lunch, a moment of restitution of the results of the work in plenary session followed.

The day ended in the late afternoon with the awarding event of the Photo contest “PhotoAdapt – The impacts of climate change in the Metropolitan City of Milan”.  This was followed by a convivial moment with an aperitif and good live music.

We are really proud of the achievements and we are also happy to have shared with so many people knowledge, best practices and questions related to the world of climate change, promoting an active and constructive dialogue on the challenges of the climate crisis.

Thanks again to everyone who participated!