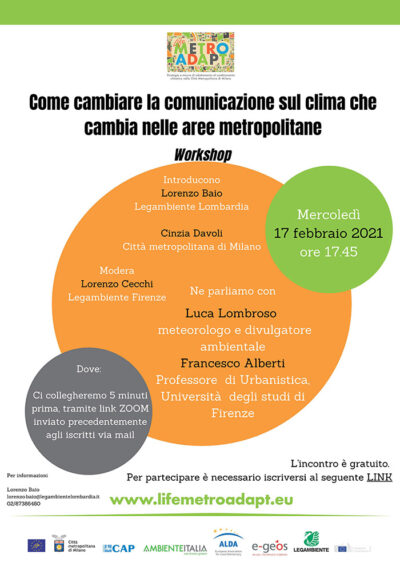 Metropolitan cities to the test of climate emergency. Green solutions that change the urban landscape.

In the first months of 2021 the Metro Adapt project organised two evenings of discussions on climate adaptation and climate solutions. During the first evening, the topic of Nature-Based Solutions (NBS) was addressed from the perspective of scientific dissemination with the aim of informing the public in detail about climate change issues. On the second evening, the objectives of the Metro Adapt project were discussed and three experiences were described by experts in the field.

The evening was presented by Cinzia Davoli from the Metropolitan City of Milan and coordinator of the Metro Adapt project and Lorenzo Baio from Legambiente Lombardia who briefly summarised the main themes and objectives of the Metro Adapt project, co-financed by the EU LIFE Programme. Afterwards, Lorenzo Cecchi, president of Legambiente Firenze, moderated two interesting presentations.The first was given by Luca Lombroso, meteorologist and scientific popularizer, who described the difficulties and history of communicating climate change issues to the general public, suggesting some new methods. The second, held by Francesco Alberti, Professor of Urban Planning at the University of Florence, sought to convey the concept that in addition to communication to the general public, communication to administrators and technicians is strategic. They must be led to overcome the current vision restricted to bureaucracy alone, which must change and expand.

These initial arguments were followed by an open discussion with questions from the audience.

The evening included a brief introduction by Marzio Marzorati of Legambiente Lombardia, who summarised the objectives of the LIFE Metro Adapt project. This was followed by three presentations by experts who have been collaborating with Legambiente for many years in various capacities: Giulio Conte, hydrobiologist and technical director of AmbienteItalia, who in addition to presenting the guidelines on NBS measures drawn up for the Metroadapt project, talked about the feasibility studies on sustainable urban drainage carried out for Parabiago and Buccinasco and the pilot interventions in Solaro and Masate.

Lidia Castagnoli from Legambiente Emilia-Romagna and contact person for the SOS for LIFE project. She told about the experience of the LIFE SOS4Soil project and the tools used by the technical actors. In addition, he focused on the depaving interventions carried out in Forlì, Carpi and San Lazzaro. 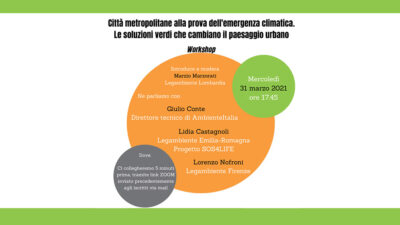 Lorenzo Nofroni, on the other hand, described three experiences in the Florence area with a different slant, a hybrid between social and ecological objectives. In other words, how to create ecological quality through participatory redevelopment projects. Finally, he described the new “paesaggi comuni” call for proposals issued by the Florence City Council, which encourages participatory projects for the reconfiguration of public spaces.

After these initial stimuli, an open chat followed with questions from the audience.