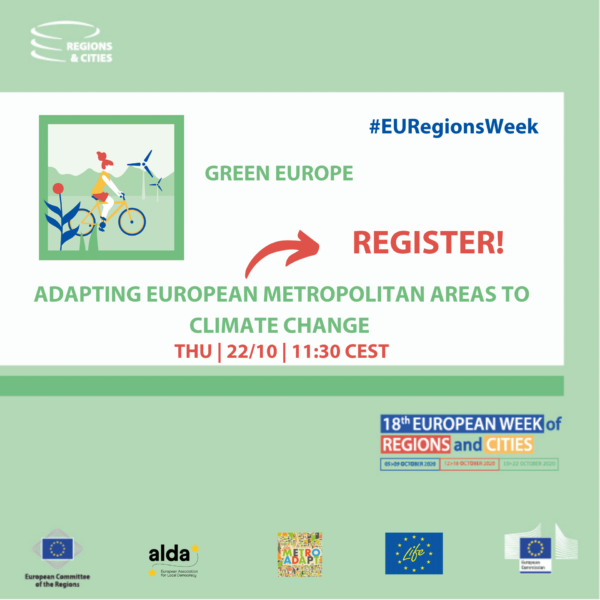 On the 22nd of October 2020 at 11:30, it will take place the workshop “Adapting European Metropolitan Areas to Climate Change” within two important international events organized by the European Commission: the European Week of Regions and Cities and the European Green Week.

Starting from the effective process developed within the LIFE Metro Adapt project (co-funded by the LIFE Program of the European Union), the workshop will analyze the fundamental role of metropolitan areas in defining a global strategy for climate change adaptation, creating a space of dialogue and good practices exchange about the climate strategies that can be effectively adopted at the local level and replicated internationally.

Specifically, the session will tackle the challenges related to hydraulic risk prevention in urban areas, the excessive soil consumption, the Urban Heat Island phenomenon, and the fundamental role of Nature-Based Solutions in climate change adaptation.

Multi-stakeholder involvement will be central: a final participatory session will ensure the active involvement of representatives of civil society, politicians and young people to ensure the creation of synergies between communities and local governments and to satisfy the need of the young population to be correctly informed about decision-making process implemented at local level regarding the fight against climate change.

Finally, the workshop will actively involve the municipalities, regions, provinces and associations of local authorities that are part of the wide ALDA network.

Registration for this workshop and all the events of the European Week of Regions and Cities is mandatory and will end on the 27th of September 2020.