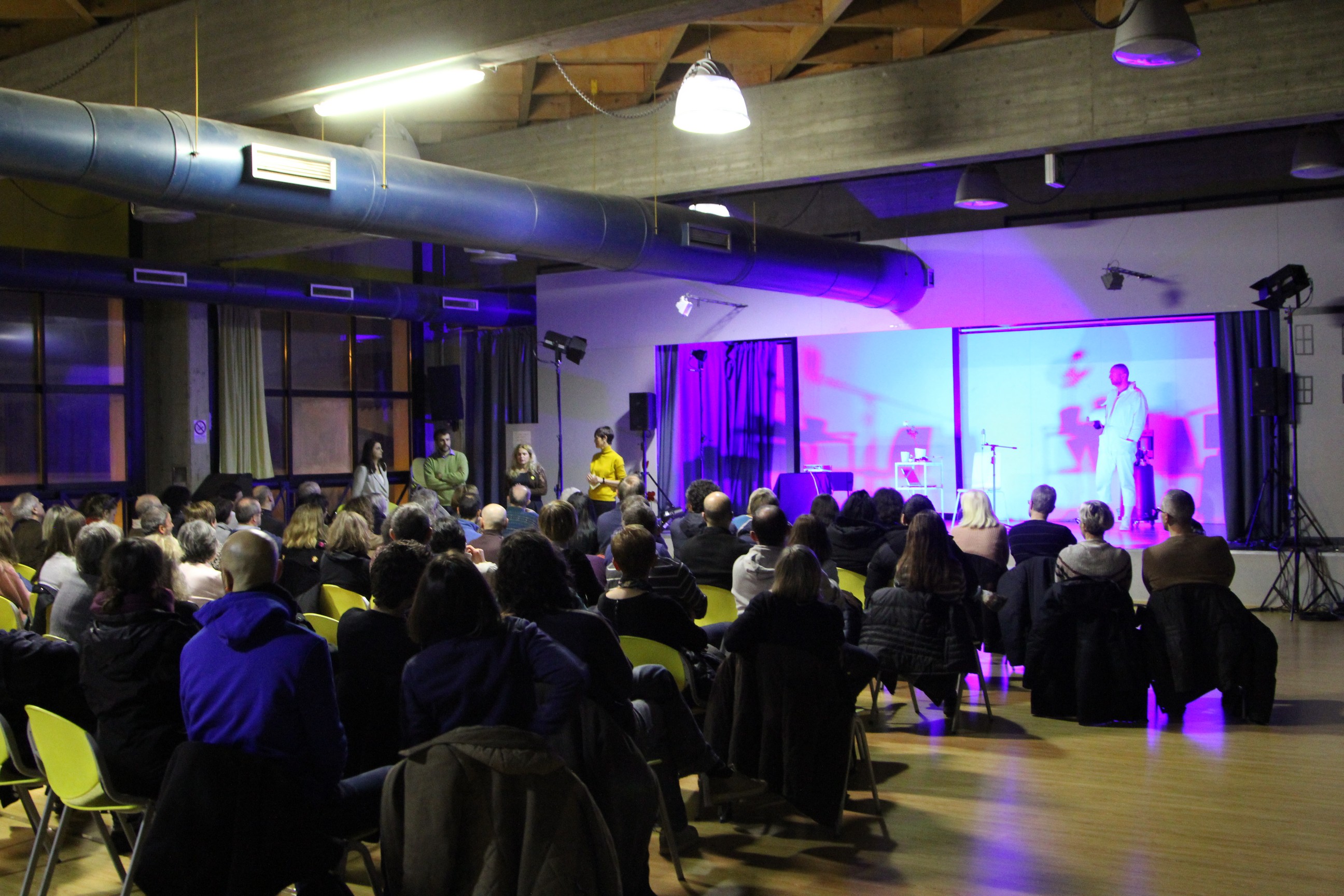 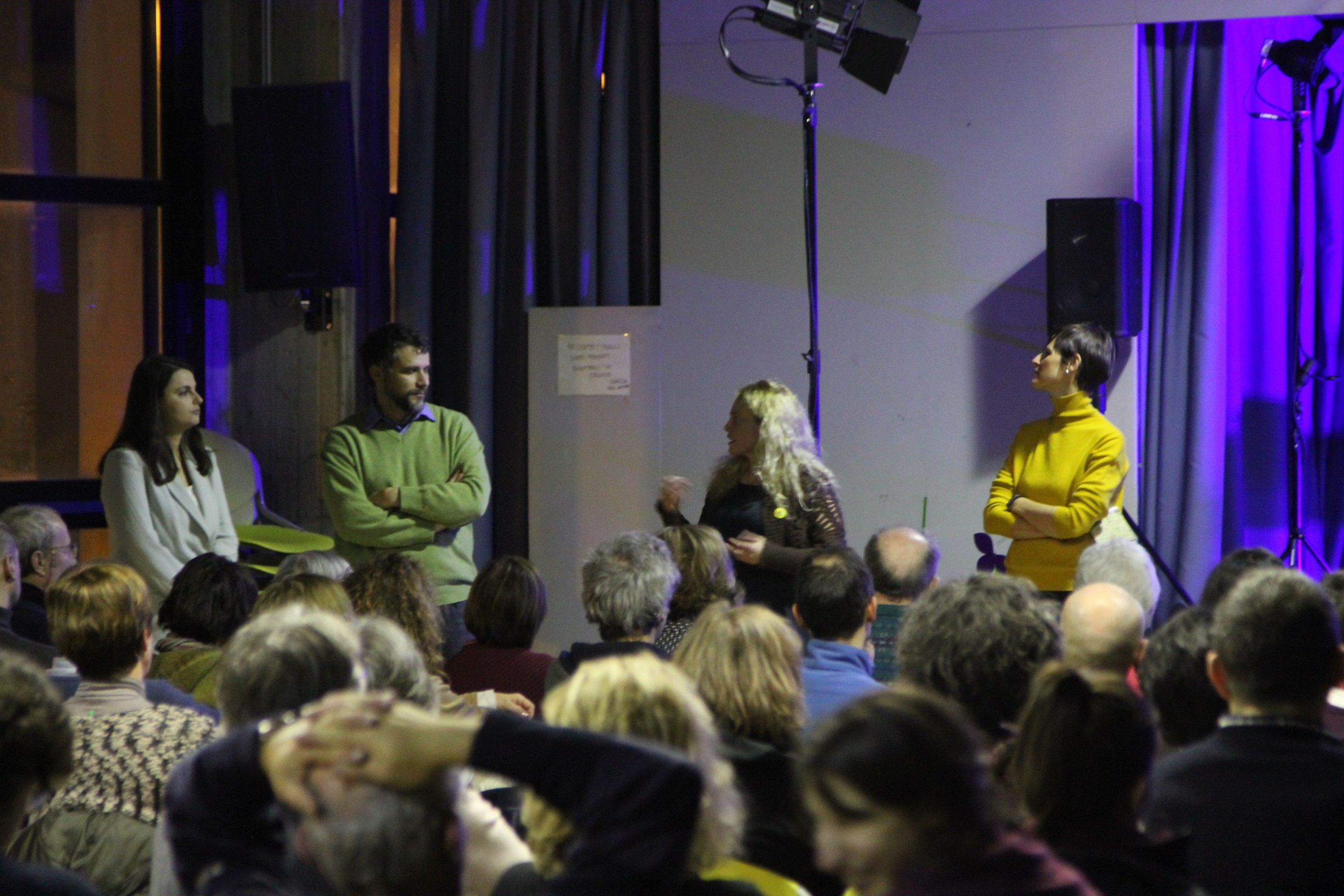 On Saturday 8th February 2020, the Metroteatro initiative was welcomed by 90 spectators in Gorgonzola (MI), with the show PALE BLUE DOT by and with Andrea Brunello, from the Arditodesìo Company.

The Metroteatro is a set of theatrical performances that the Project Metro Adapt – co funded by the LIFE Programme of the European Union – has designed to explain the risks related to climate change and to communicate the need to recover urban areas, fostering adaptation to extreme climatic phenomena (i.e. extreme rainfalls, floods, thermal anomalies, etc.).

“Pale Blue Dot” is a compelling and “harsh” show that reminds us all of our responsibilities towards the environment, stressing that the time at our disposal to change the way we conceive and exploit the world is less and less.

During the opening of the event, the Councillor for Ecology of the municipality of Gorgonzola (MI) and the representative of Legambiente Martesana local groups shared with the audience the actions put in place by the local administrations and the civil society to reduce the impact of climate change on the territory. Afterwards, Ambiente Italia and Legambiente Lombardia explained the contents of the Metro Adapt project, its objectives and expected results.

In short, the interventions pointed out the actions of the project, explaining the main critical issues which have been identified. The project focuses on some of the climate problems that mostly affect metropolitan areas. Specifically, it aims at integrating climate change adaptation strategies into the territorial plans of the Metropolitan City of Milan, promoting the creation of a solid climate change governance, shared among local authorities.

In this context, the project is working on the dissemination of Nature-Based Solutions, nature-inspired interventions that bring environmental, social and economic benefits, helping to improve the capacity to adapt to climate change and boosting urban areas’ resilience.

As part of the project, two Sustainable Urban Drainage Systems (SUDS) will be implemented as pilot interventions in two municipalities of Milan metropolitan area: i) canal network restoration to increase retention capacity in Masate; ii) a sustainable drainage system will be adapted in a car parking in Solaro.

These interventions, which CAP Holding (one of the project partners) is designing, will serve as an example for all the territories of the Metropolitan City of Milan, renewing the urban and technical tools available to the administrations to speed up the process of landscape regeneration.

Another important line of action of the project is to inform citizens, raising awareness and disseminating data on climate change issues in urban and peri-urban areas, thus reducing the distance between civil society and local public entities. To this end, the “Metroteatro” initiative has been very successful, bringing the show “Pale Blue Dot” to 6 cities in the metropolitan area of Milan.

Watch the trailer of the amazing play Pale Blue Dot “An incredible story of hope, wonder, beauty and despair”. By and with Andrea Brunello. Directed by Christian Di Domenico. Music by Enrico Merlin: