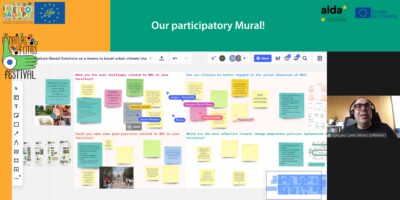 From the 22nd to the 26th of February 2021, Metro Adapt joined The Nature of Cities Festival, a virtual festival that engaged 2300 people from 72 countries. 18 plenaries, 180 seed sessions and field trips engaged stakeholders from the whole globe into discussions on the future of our cities.

The Metro Adapt project joined the international event as one of the main co-organizers, proposing a wide variety of activities and sessions, disseminating the project results and generated knowledge and establishing linkages and synergies with stakeholders from all over the world. Participants were able to visit Metro Adapt exhibitor booth, where it was possible to consult the project outputs and information, interacting and learning with the project partners.

This has been our line-up within the Festival:

All the sessions have been very participative and with full engagement. The first workshop, “Nature Based Solutions as a means to boost urban climate change adaptation” created a space of dialogue among the key stakeholders which could be potentially involved in the implementation of sustainable strategies to limit the impact of climate change. The workshop counted on the participation of Goncalo Canto Moniz, project coordinator of the Horizon 2020 URBINAT Project, who shared the project generated knowledge about nature-based solutions benefits and social, economic and environmental challenges.

On the following day, participants had the chance to travel 360° inside the Metro Adapt project using a google earth map, with a focus on the pilot interventions implemented in Masate and Solaro municipalities. On February 24th at 15.20 CET, ALDA’s Secretary General – Antonella Valmorbida – together with Mary Rowe – President of the Canadian Urban Institute, got virtually together in the session “Participation, Local Democracy and Sustainable Cities” during a Festival’s Plenary session to talk about the role of local communities as key actors for cities and urban areas’ sustainability. The following day, Metro Adapt organized a third session “Covenant of Mayors: The Sustainable Energy and Climate Action Plan in Metropolitan Areas”. The workshop was released in Italian and it was the occasion for a positive exchange of ideas and reflections between representatives of different metropolitan areas about the implementation of Sustainable Energy and Climate Action Plan (SECAP).

The last Metro Adapt session “Science Communication through theatre and the arts: The example of Pale Blue Dot” took place on February 25th. The workshop was joined by Andrea Brunello actor and director from Arditodesio Theatre Company who talked about the Pale Blue Dot show, a production by the Jet Propulsion Theatre that aims at spreading the message about climate change through theatre and art. During the session, participants had the chance to interact with the director, asking questions about the show, reactions from the public and further projects of the company related to the connection of scientific data and theatre.

Thanks to everyone who joined us!