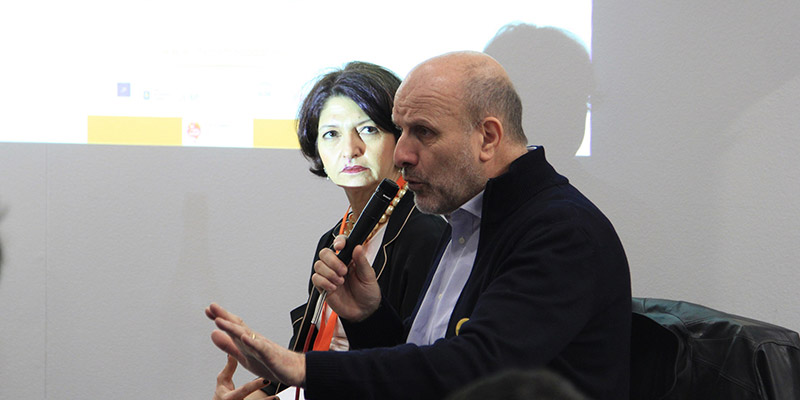 We take for granted the existence of changes in climate, leaving aside the debates on how much these depend on mankind and anthropogenic factors or on natural cycles. The question is then: how does a city adapt to them? What tools does a municipality have to avoid economic, human and environmental damages? What can an integrated water service operator do?

We talked about it in the framework of LIFE METRO ADAPT project and the hospitality of Do the Right Think with LucaCetara, Lombardy Foundation for the Environment LorenzoBono – AmbienteItalia CinziaCesarini – Metropolitan City of Milan MarcoCallerio – CAP Holding MarzioMarzorati – Legambiente Lombardia.

“The seminar was an opportunity to go beyond the problem of what or who is at the origin of climate change. As indicated in the opening by Marzio Marzorati of Legambiente Lombardia, we wanted to place emphasis on adaptation and on the need to prepare for unavoidable impacts”. This is what 25 EU Member States are doing, as Luca Cedara of FLA highlighted, with a complex and articulated net of adaptation strategies. Among them, the LIFE program, that with 184 millions Euros allocated to 60 projects on adaptation expects to impact an area of 1.8 million km2. At local and regional level, the Commission introduced the adaptation issue into the Covenant of Mayors, with the aim of making cities more aware of the need to adopt local adaptation strategies. About 40% of European cities with more than 150,000 inhabitants are said to have adopted adaptation plans. But what do they consist of? Lorenzo Bono of Ambiente Italia has summarized the paths traced by the European Union to classify adaptation measures into the following categories:

The green and soft measures aim to reduce critical issues and increase the adaptive capacity of the human and natural systems by using the resilience of the system itself. These types of measures are mainly low-cost and today we have all the necessary knowledge to implement them. On the other hand, technological and innovative solutions generally need more capital for implementation and research.

Afterwards, Cinzia Cesarini of the Metropolitan City of Milan explained that LIFE Metro Adapt project is a priviledged occasion to test the approach of pursuing adaptation by integrating it into territorial planning. It will also be the occasion, she added, to  promote concrete initiatives to increase the resilience and the adaptation capacity of the territory to the most adequate scale. Through the Metropolitan Territorial Plan (MTP) the Metropolitan City of Milan could assume a coordination role in the formulation of integrated local governance.

Finally, Marco Callerio of Cap Holding shared some of the technical solutions to increase the resilience of cities towards climate change, ranging from large-scale urban transformations to small interventions that may involve private individuals.